COVID-19 Update:  Mr. Car Shipper is continuing to pickup and deliver vehicles in all markets.

Nationwide Car Shipping!
Have Your Car Picked Up On Time Without Bait And Switch Quotes
Welcome To

Two Simple Steps To Get your Car Shipping Quote
Step 1:  Where Can We Send Your Quote?
Step 2: Input Shipping Details
"We Manage Chaos So YOU Don't Have To" 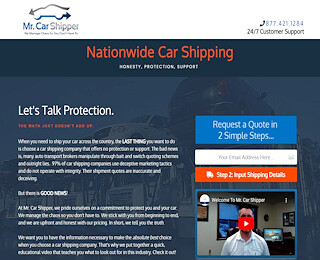 If you’re one of our gallant servicemen and have just been deployed to another base, you’re most likely entitled to have your vehicle shipped to the new base. However, the government pays for the shipping expense of only one personal operating vehicle (POV).  Since a lot of families have more than one car, it is not uncommon to find military personnel sourcing for the best military auto transport. If you’re in the market for one, you need not look beyond Mr. Car Shipper, the foremost military vehicle shipping companies in the United States.

Does the military ship your car for free?

The military may cover your car shipping expense if:

As mentioned earlier, however, the military would only cover the shipping cost of one POV. If you need to ship more than one vehicle, you’ll need to hire the services of a military auto transport company that promises the best value for your money.

Are all vehicles eligible for military auto transport?

According to the rules, the government is only mandated to pay for the shipping costs of POVs. Still, some bases may even have more stringent regulations. For example, certain stations do not allow military personnel to ship large SUVs or pickup trucks, perhaps due to a lack of adequate storage space. You need to check in with your new base to know if there are any specific rules you should be aware of.

What are some helpful military auto transport tips I should know?

How long will it take to ship my car?

Your car’s transit time would depend on moving distance and some other factors that may be unique to your situation. Once you place an order with us, we will give you an estimated transit time. Most times, we try to deliver the car to the desired destination before faster than the estimated time.

Get in touch with a top military auto transport company

At Mr. Car Shipper, we understand how hard PCS can be on families. The last thing we want you to worry about is if your car would get to the new base on time. Get in touch with us today, and we will go the extra mile to help out our gallant heroes.

We welcome your comments!